Screen Systems is based in Guelph, Ontario, Canada and has a representative network located throughout Canada, from the West to East coast, as well as Representatives around the world.

In 2004, Screen Systems was appointed as the Canadian Master Dealer/Distributor for the Terex|Simplicity line of equipment.  Doug exchanged his decades of service as an employee of Simplicity, for the opportunity to create a company that is able to primarily promote Terex|Simplicity products, as well as offer other complimentary lines of products, including Terex|Canica.

Committed to the Best Service

Doug has established a team with a wealth of knowledge and commitment to providing the best of service across the country…and the world.  His son Stephen Harvey, whom has been around the business his entire life, officially began working for Screen Systems when it opened in 2004, and is now the Sales Manager.  Since 1993, Dave Herron, has been a part of the Simplicity (and now Screen Systems team), as the Parts & Service Manager.

With same-day quotes, and extremely efficient support, Screen Systems has the quickest turn-around time in the industry.  In addition to our supply of new equipment, we also pride ourselves on the Parts and in-field Service support and aftercare.  We stock and distribute only OEM replacement parts for all of our supplied equipment models.

Our parts customer response turn-around-time is unmatched in the industry, with often same-day shipping of your much needed replacement parts.  There is nothing worse than a failed piece of equipment, and having to wait for prolonged periods of time to get answers, parts, and service technicians in the field.  Our long-term customers know that they can depend on Screen Systems to be there quickly and efficiently when they need support.  Our goal is to minimize customer downtime, and make the experience as user-friendly as possible.

With over 2,400 pieces of equipment in the field today, Screens Systems has stood the test of time, and has proven to be Canada’s longest and most reliable supplier of Screening, Feeding, and Crushing equipment.

Get a Quote For Your Project

Featured in Rock to Road

A lifetime of Simplicity 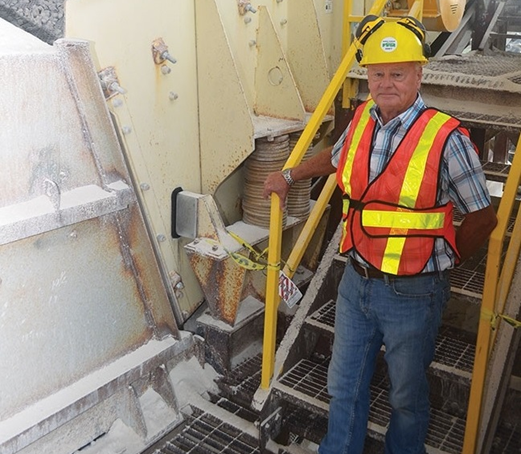 The 73-year-old’s impressive run began when Simplicity recruited him straight out of high school.

“People looking for help those days came to the high schools,” Harvey explains during an interview at the head office of his company Screen Systems Inc. in Guelph, Ont., which is the authorized distributor for the Terex Simplicity and Canica product lines in Eastern Canada. “Back in those days we couldn’t afford to go to school [beyond high school], and I was making $1 a week. I was studying accounting at the time and TD Canada Trust came and
offered me $37.50 a week – a woodworking company also offered me $37.50… Simplicity came and offered me $50 a week. And when you’re making $1 a week, the dollar swings the weight.”

Extra cash aside, choosing to sell this line of products has worked out nicely for Harvey, who has spent the last 55 years selling nothing but these brands with great success. He says he was fortunate to learn from industry veterans from day one.

“I learned from people that had been in the business for 20 years,” he says.

Even with all the experience he has amassed over the years, Harvey doesn’t consider himself an expert in the industry.

“The minute you’re an expert you’ve got nothing left to learn. I’ve never met that person yet,” he says. “You never stop learning.”

Relationship building
Harvey says one of the key elements to having a successful business is treating your people right.

“You treat your people well, you want them coming in smiling and laughing,” he says. “Pat them on the back and never kick them in the ass, and they will do much more for you. We have a team that works well together.”

Treating your suppliers with respect also goes a long way in the business world, Harvey adds.

“We need them to make money also, so we can be sure they are around to support us and their products for years,” he says. “This advice came from a former employee of Lafarge.”

Branching out
Harvey decided to branch off on his own and sell the Terex Simplicity line through his own company, Screen Systems, in 2004.

“I worked for them out of my basement for two years,” Harvey says, recalling his first days venturing into entrepreneurship.

In recent years, he has focused much of his time on preparing the next generation to be able to run the company without him, if he ever decides to hang up his hardhat.

“We’ve got to have things set up for 10 years down the road,” Harvey says, adding that he has no interest in retiring just yet.

He is excited to have is son, Stephen Harvey, who was formerly a commercial pilot, working in the family business; as well as an employee that has been with him for 20-plus years (Dave Herron); and his loyal salesman, Rob Lawlor.

“It takes everyone to make the team successful,” he says. “Everyone here helps everyone, we are five people.”

Harvey is excited to have recently had a young up-and-comer come on board.

“The young generation coming out of school is very smart and have a lot of technology know-how, ”

“I’ve never lost the thrill of getting an order for a machine, regardless of size,” he says.

In all his time selling the Simplicity line, Harvey has only ever had one machine returned for not doing its job, and it wasn’t being used in the aggregates or mining sectors. It was a machine being used in a test to see if the screens would be a good fit in the production of French fries.

If Harvey were to only give one piece of advice to young people entering the industry, it would be to remember the word ‘service’.

“You’re being paid to offer a service, you never want to forget that. It’s a word that has stuck with me for 55 years – service, service, service,” he says. “It’s rewarding work, if you work hard – and you have to work hard, nothing comes easy.”